Thruxton is Neatafan’s local track, and unfortunately showers were forecasted all weekend. We fitted the spare engine and found it a bit smokey on the dyno. Tom found it hard to select a gear ratio that suited both the drive off slow corners and the fast sections. We were 5th fastest on Friday with Ed Rendell and Thomas Strudwick putting in good times.

A new rear tyre was fitted part way through qualifying, a bit of slip streaming with Ed Rendell and Tom set the FASTEST TIME! A few tenths quicker than his rivals but a major step forward for the team. In fact the second sector of the track was at record pace. You may not be aware of this, but the Mahindra engines we are using are a little less powerful than the dominant KTM’s. 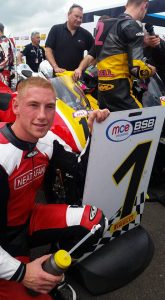 After Saturday’s race with pole position we were brought back down to earth with another slow start. The leading group of four gapped Tom and with no slipstreaming possible, he ran around to finish a decent 5th. Asher Durham on the other Mahindra was snapping at his heals on certain corners and seemed to have a better choice of gear ratio’s but Tom held him back.

Sunday warm up was used to try a practise start without using the launch control and it was thought to be better. Just prior to the main race, the bike was warmed up and put back on tyre warmers, but when we tried to start it for the race… the 20A fuse blew! An electrical fault developed at the critical moment with no time to diagnose or repair…what a weekend of highs and lows! Fingers crossed for better luck and fewer gremlins in Round 8 at Cadwell Park.

For more information on the Championship, visit www.neatafan.co.uk/news.