Brands Hatch GP circuit towards the end of July, brought unsettled weather. Tom was in the top 12 in early (dry) practise, trying to find the best gearing compromise. This bike is tricky to gear for slow corners. Saturday qualifying was early morning and the circuit was damp. We planned to start on wets and change over midway through the session. He came in to the pit, but said it was so slippery he decided to continue with the wet tyres. Several other riders went out in the last 10 minutes and set fast times, leaving us in 18th place! We later discovered his front tyre was almost flat, which was probably why he thought it slippery.

As we went out for the first race the heavens opened. It was so heavy they cancelled the race and when we returned to our pit… it was flooded. It took the circuit staff some time to pump the water away (two attempts!) then we picked up the tent and relocated up the paddock.

Sundays first race saw Tom move up the field from 18th to 8th at the finish. We were all pleased with this as it meant starting the re-run of Saturdays race in that position. We decided to try the later type exhausts and raise the gearing slightly for the last race. 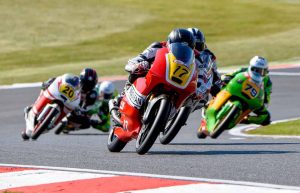 He made an average start and was 9th for the first few laps. Then he started to pick up the pace, heading his group of riders with a gap to the leading six coming down as he drew up to them. He finished in sixth, with the 2nd fastest lap of the race, a few more laps would have seen him move towards the front. We all went home elated, especially young master Joshua who is Neatafan’s latest mascot and fan!

Forward progress is being made and we look forward to Round 7 at Thruxton.